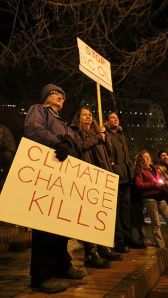 Not two weeks since the federal government’s long-anticipated approval of the Northern Gateway pipeline, the magnitude of the obstacles faced by the project are becoming clearer by the day.

There is widespread public hostility — both in Kitimat, envisioned as the pipeline’s end location, as well as across British Columbia more generally. First Nations and environmental groups have launched several court challenges, with more expected to come. Massive protests and civil disobedience are inevitable. Efforts will soon be underway to initiate a province-wide referendum. The government of BC, which must provide about 60 permits, is ambivalent about the pipeline at best, while federal opposition parties are promising to reverse the project’s approval if they win next year’s election.

All this in addition to the much-ballyhooed 209 conditions.

Nevertheless, as rosy as matters may look from certain angles, victory is far from assured. The entrenched power of Enbridge and its political backers in Ottawa and Edmonton is nothing to scoff at, and pipeline opponents would do well to take a step back and consider why exactly they are opposed.

I say this because in the coming months, British Columbia will be bombarded by relentless propaganda (as though we haven’t had enough already) claiming that Enbridge has heard our cries of protest and will commit to building the greenest, most environmentally responsible pipeline it can build. The threat of bitumen spills on land and at sea will be neutralized. The company will meet and exceed provincial demands for “world-leading” response, prevention, and recovery systems.

Never mind for a moment the disingenuousness of such attempts to deflect and to co-opt. Never mind Enbridge’s less-than-exemplary record on oil spills. Such promises, even if true, are irrelevant because they fail to address the proverbial elephant in the room, climate change. The fight against pipelines is not just about our wilderness, our rivers, our coastlines — vital though these are. It is about the planet-wide impact of dangerously accelerating tar sands expansion, a process that Northern Gateway is meant to facilitate.

According to current projections, if warming is to be kept within the two-degree limit pledged by world leaders at Copenhagen, global greenhouse gas emissions must peak some time before 2020. Such a scenario is not consistent with the continued building of large-scale fossil fuel infrastructure with decades-long lifespans (at least not here in the developed world). Virtually every new pipeline, oil refinery, LNG facility, or coal-fired power plant is another nail in the coffin of climate stability.

It is possible to disagree reasonably about how rapidly to phase out existing infrastructure, how aggressively to tackle the transition to wind, solar, tidal, geothermal, and other renewables. But at the very least, at this stage in our history, to continue full speed in the opposite direction without a care for the consequences should be unthinkable.

That — in addition to the risk of spills — is what’s wrong with Northern Gateway. That is why we can’t let them win.

If anyone would like my two cents on the controversy surrounding Trinity Western University, its proposed law school, and its homophobic “Community Covenant,” please see the letters section of today’s Vancouver Sun. My letter appears at the very bottom, under the heading “Trinity’s gay policy anti-Christian.”